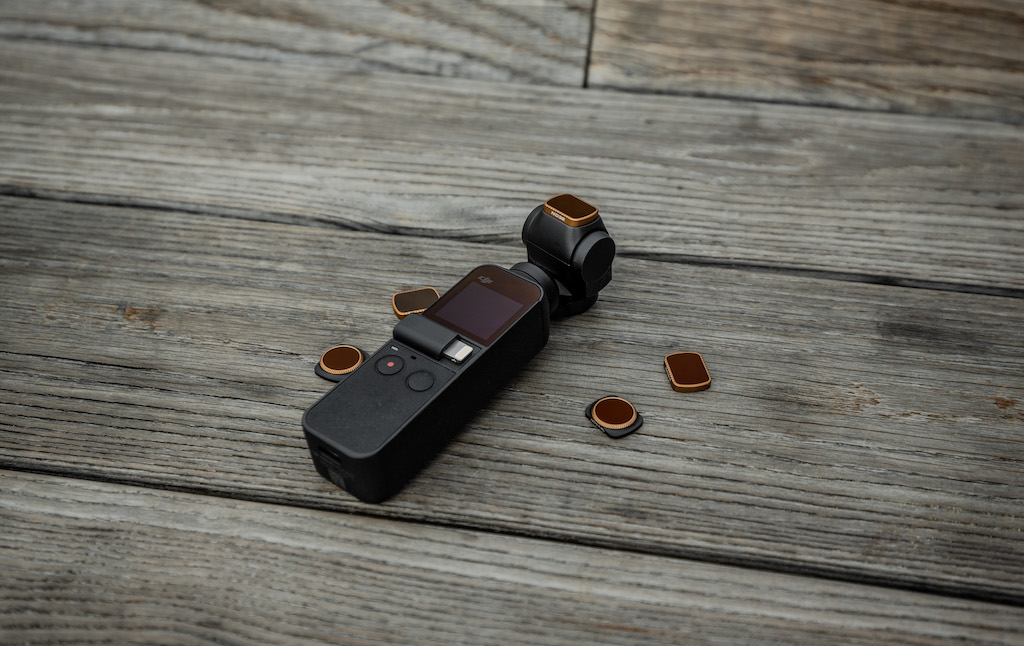 DJI’s smallest 3-axis handheld gimbal camera to date is impressive, but is it worth the price tag?

While you may have spent a thousand bucks on your new smartphone, it probably doesn’t offer 3-axis gimbal stabilization.  That’s where the DJI Osmo Pocket comes in, provided you’re a vlogger or other semi pro production extraordinaire who needs that sort of buttery smooth image stabilization for their phone content.

For the average consumer shooting with their mobile device, however, another $350 on top of what was already spent might be a questionable investment, though that price tag is still under GoPro’s $400 for the Hero7 Black.

One advantage the Hero7 Black does have over the Osmo Pocket is its more action-oriented square form as compared to the Pocket’s fragile and elongated candy bar shaped gimbal camera that might not hold up strapped to a chest mount on a Mammoth powder day.  (Though, like its name implies, the Pocket does fit nicely into a pocket thanks to its foldable design).

And unlike the Hero7 black which is built to be waterproof out of the box, the Pocket isn’t, and you’ll need to buy an extra waterproof housing that at this time is still in the works, according to DJI.

An ecosystem to “Capture Life’s Moments”

DJI also lists a handful of other accessories in the works for the Pocket, including a WiFi module that provides WiFi/Bluetooth transmission between the Osmo Pocket and your smartphone, a charging/storage case, and an external 3.5mm mic adapter in case the Pocket’s “noise cancelling” audio capture capabilities isn’t suited for the project at hand.

DJI will also offer an extension rod (a glorified selfie stick) and an “expansion pack” that includes a control wheel for precise control of the gimbal, an accessory mount and the wireless module previously mentioned.

And finally, DJI also plans to release a set of ND (neutral density) filters designed to reduce the amount of light entering the camera sensor so that the user has a wider range of creative exposure options when setting ISO and shutter speed in varying light conditions

The Pocket boasts the same 1/2.3-inch camera sensor as the original Mavic Pro, Mavic Air and Mavic 2 Zoom with the ability to capture 4k video at up to 60fps and take crisp 12MP stills.

The Osmo Pocket also has an integrated 1.08-inch touchscreen built into the handle just below the gimbal so the user can scroll through different shooting modes without connecting their phone, making it a little more user friendly than the prosumer-aimed Osmo Mobile 2, which aside from sporting a larger camera and actually being larger, cannot function alone and must be connected to a mobile device running the DJI Go app.

DJI claims the Osmo Pocket can record a continuous 120 minute 4k video on a single charge and has a quick one hour charge features that boosts the battery back up to 90% when using the Pocket as a stand alone device.

The more powerful Osmo Mobile 2, on the other hand, can run up to 15 hours off one battery, another selling point for prosumers.

While significantly less powerful than the Osmo Mobile 2, the Osmo Pocket still runs longer than any current GoPro, and in all honesty, over 2 hours of capturing, “Life's Daily Moments,” is probably more than enough.

While the Hero7 also has an impressive HyperSmooth image stabilization system built in, it’s no match for a gimbal, and the Osmo’s 3-axis gimbal, if anything like the gimbal on the previous Osmo Mobile gimbal or Mavic series drones, is sure to produce pristine cinema-smooth video.

Aside from sporting similar intelligent flight features found on DJI’s consumer drones, like ActiveTrack, and FaceTrack, as well as timelapse and motion lapse modes, the DJI Osmo Pocket features two different shooting modes designed to cater to the needs of either everyday shooters, with Story Mode, or professionals, with Pro Mode.

Story Mode is similar to GoPro’s Quick Stories, aimed at making sharing content directly to social media super easy and streamlined.  Capture a clip and choose from 10 different auto generated templates and DJI’s “Mimo” handles the camera movements and then generates a story for you. Wahlah.

In Pro Mode, you have more control over the camera’s exposure parameters enabling you to capture creative content according to your own vision in a multitude of light conditions from dawn to dusk.  Perhaps the most exciting feature in Pro Mode is the ability to take a handheld long exposure up to 3 seconds, while the gimbal acts like a tripod to stabilize the shot, making creative long exposures possible, like light painting under the stars.

The DJI Osmo Pocket is available now for purchase through the DJI website and your favorite electronics dealer.

If you’re in the market for a pocket sized gimbal catered to sharing life’s little moments on social media, the Pocket is for you. And if you’re a vlogger who doesn’t already own a gimbal camera, the Pocket’s mobility and 3-axis stabilization is sure to impress even those used to shooting with full frame or 1-inch camera sensors

For more on advice on filters and camera gear, be sure to subscribe to our newsletter, where you’ll also be informed of the latest news and products from PolarPro.